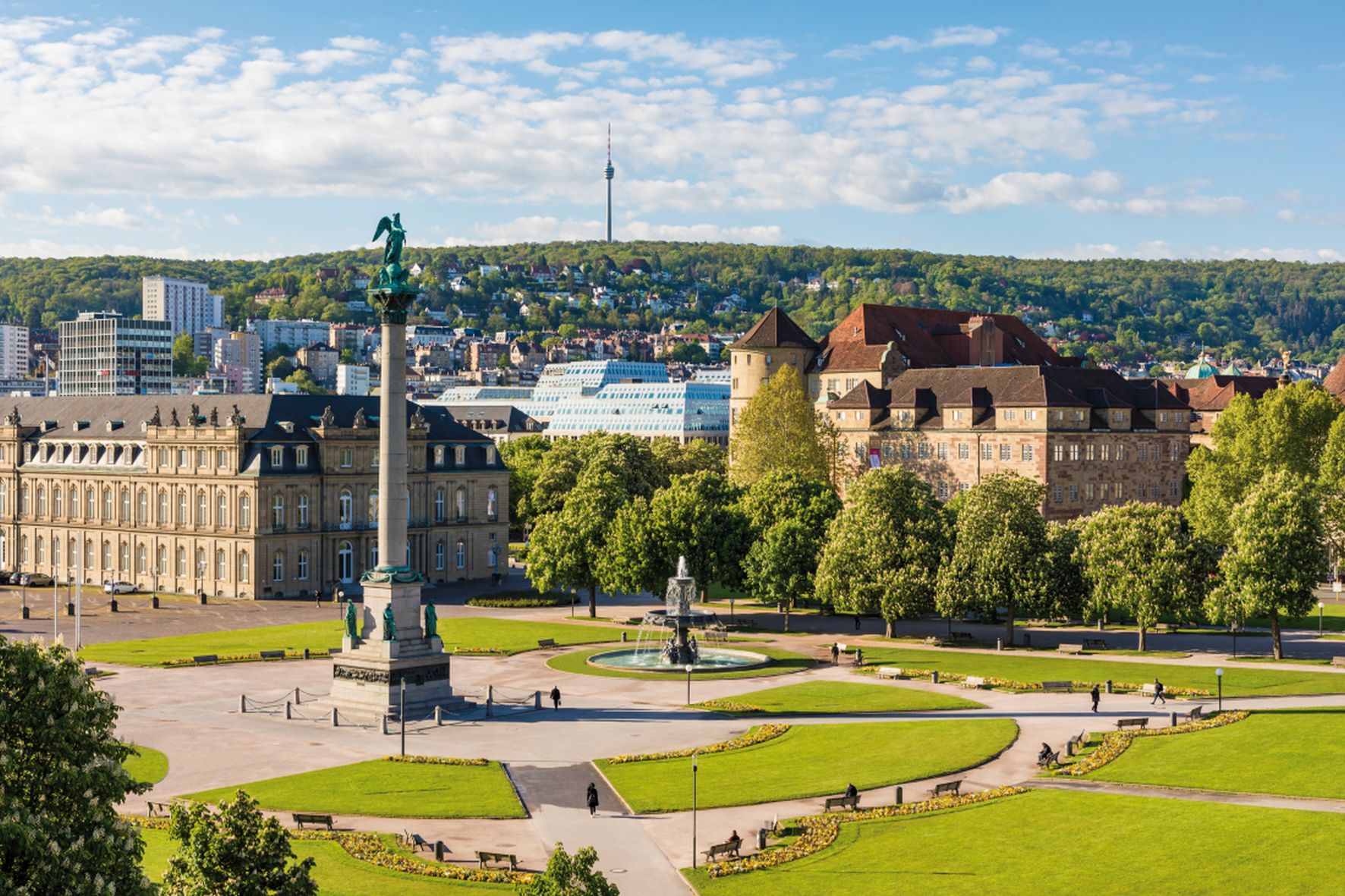 “Herrgottsbscheißerle” (Maultaschen), the Stuttgart Ballet, Bosch, Ritter Sport, Porsche, Otto Dix, Stihl, Le Corbusier, GinSTR, Kärcher, Kessler, Mercedes, Oskar Schlemmer, the Television Tower, Wulle, Die Fantastischen Vier, Hugo Boss – these are just a few of the many names that have left their mark on the Stuttgart Region and made it what it is today.

The name Stuttgart derives from “Stuotgarten”, the stud farm said to have been founded by Duke Liudolf of Swabia in 950 A.D. To defend it, the Old Palace was built, which since 1949 has housed the Württemberg State Museum. The New Palace was the residence of the kings of Württemberg up to the middle of the 19th century. Today the building contains ministries of the Baden-Württemberg state government and state reception rooms. Palace Square is where the city’s heartbeat can best be felt. Just by turning once on your own axis, you can see many of the city’s main attractions: a synthesis of medieval, baroque, classical and contemporary architecture, Stuttgart’s characteristic hill slopes, views of the vineyards, the station tower – and overlooking it all a symbol of Stuttgart’s inventive genius – the Television Tower.

For Car Enthusiasts
The Stuttgart Region is the cradle of the automobile – and thanks to the Mercedes-Benz Museum and the Porsche Museum a mecca for automobile fans from all over the world. The Mercedes-Benz Museum is a living testimony to the over 130-year evolution of the automobile and the Mercedes-Benz brand. It documents automotive and contemporary history from the world’s first patented car to the hydrogen-powered vehicles of the future. At the Porsche-Museum more than 80 vehicles illustrate the history of this sports car producer. Another automotive highlight is the Motorworld Region Stuttgart in Stuttgart-Böblingen. The complex, consisting of a design hotel, an event venue and an exhibition, is a stylish setting for all kinds of activities on the theme of classic cars. The automobile pioneer Gottlieb Daimler was born as the son of a baker in Schorndorf in the year 1834. His Birthplace is now a museum and gives personal insights into the inventor’s cosmos.

For Culture Lovers
The 26-m-high glass cube of the Museum of Art is a work of art in its own right. It owns a world-famous collection of works by Otto Dix, including the “Portrait of the Dancer Anita Berber” and the “Metropolis” triptych. The State Gallery’s postmodernist Stirling building is an eye-catcher on Stuttgart’s so-called ‘culture mile’. One of Germany’s most popular art museums, its treasures include Oskar Schlemmer’s “Figurines from the Triadic Ballet” from the early 1920s and the Joseph Beuys Room, which the artist installed himself. The Weissenhof Estatein Stuttgart is an important testimony to the Bauhaus style of architecture. Conceived by 17 architects in 1927 for the Werkbund exhibition “Die Wohnung” (“The Dwelling”), its two Le Corbusier houses are now a UNESCO World Cultural Heritage site. The Stuttgart State Theatres, Europe’s largest triple-branch theatre ensemble, are the city’s cultural flagship. The award-winning Stuttgart State Opera provides new impulses for contemporary music theatre, dance enthusiasts associate the Stuttgart Ballet with great names such as John Cranko and Marcia Haydée, and the Schauspiel Stuttgart theatre company is often in the public eye as one of the most innovative in German-speaking theatre circles. As the birthplace of German Hip-Hop, the Stuttgart Region has a diverse and innovative music scene. The annual jazzopen Stuttgart, the Stuttgart Music Festival or the Ludwigsburg Festival are outstanding examples of this.

For Epicures
Stuttgart’s cityscape is defined by the vineyards which stretch into the centre of town. This wine-growing region with a long tradition has many great “Wengerter” (vintners). Their wines have won many awards and appeal to the taste of wine lovers and experts alike. Much of the wine produced here is also drunk locally, for example in the traditional “Besenwirtschaften” (“broom taverns”) – temporary wine taverns serving only the wine growers’ own wines and delicious Swabian food. You’ll find all you need to know about the history of wine growing at the Stuttgart Museum of Viniculture. Down-to-earth Swabian dishesand exquisite starred cuisine are equally at home in the Region. “Maultaschen” (filled pasta) or “Gaisburger Marsch” (a savoury hotpot) are just two of the classic regional specialities. For starred fine dining there is a wealth of starred restaurants – with eight in Stuttgart alone, and 16 more in the Region. In March 2020 the state capital also gained a two-star restaurant, “Olivo” at the Steigenberger Hotel. Traditions are also kept alive at the annual festivals: the Cannstatt Beer Festival has become one of the largest public festivals in the world. The focus here is on the huge beer tents of Stuttgart’s breweries. The Stuttgart Wine Festival and the Fellbach Autumn Festival are just two of the many wine festivals, and in the weeks of Advent there are countless atmospheric Christmas markets.

A Look at the Region
The area around Stuttgart stands out with its medieval charm, baroque elegance and famous men of letters. Nowhere else are there so many well-preserved half-timbered buildings as in the medieval town of Esslingen. The city of Ludwigsburg boasts Germany’s largest baroque palace complex. Ludwigsburg Palace (1733), also known as the “Swabian Versailles” consists of 18 buildings and is surrounded by a 32-hectare park. The Galerie Stihl in Waiblingen and the Kunsthalle Würth present outstanding art collections and no less interesting temporary exhibitions. The Museum of Modern Literature and the National Schiller Museum in Marbach am Neckar are the only buildings in the world to be devoted exclusively to exhibitions of literary works. In Göppingen the Märklineum is opened its doors to the public in June 2021. On an exhibition area of 2,000 square metres the museum presents Märklin products from the whole of the firm’s past and documents the history of the company. A special highlight is the 400-square-metre model railway layout, which can be accessed on two levels.

The Christmas city of Stuttgart invites you to one of Germany’s most beautiful Christmas markets. 23. November – 23. December

Just in time for Advent, the city centre of Stuttgart is transformed into one of the most beautiful and oldest Christmas markets in Europe. Embedded in the picturesque backdrop of the New and Old Palace, the King’s Building and the Collegiate Church, the Christmas Market attracts around 3.5 million visitors every year from Germany and abroad to the state capital of Baden-Württemberg.

Between tradition and new impulses

Wine growing has a long tradition in Stuttgart – but it’s nevertheless open to new trends. This is evident, among other things, from the many awards conferred each year on its vintners.

By the 16th century Stuttgart was already one of the largest wine-growing communities in the Holy Roman Empire of the German Nation. The main wines grown in the Stuttgart Region today are the red varieties Trollinger, Lemberger and Spätburgunder (Pinot Noir). Trollinger is as inextricably linked to the region as Porsche and Mercedes-Benz are to Stuttgart. This fruity, light red wine matures late and can also be enjoyed when it is still young, nicely chilled. Originally this vine with its large grapes came from the South Tyrol and Trentino, where it goes under the name of Vernatsch. Nevertheless, it would seem likely that the name “Trollinger” is a corruption of “Tirolinger“. As far as white wines are concerned, Riesling leads the field and is made into outstanding wines by local vintners. Other varieties include Kerner, Weißburgunder (Pinot Blanc) and Sauvignon Blanc. 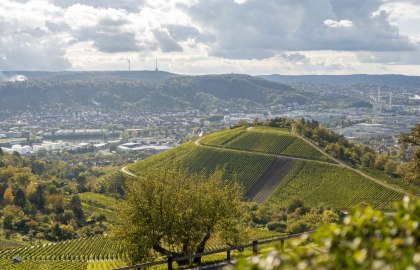 Stuttgart’s topography is unique in Germany. The city centre nestles in a valley basin, enclosed by green hills. Thanks to this unique location, vineyards can even be found in the centre of town. In order to be able to access the steep terraces, vintners built flights of steps and paths there in the second half of the 19th century, known as “Stäffele” (“steps”). The state capital of Stuttgart is the only German city to own 16 hectares of municipal vineyards. These are spread over nine different locations, most of which consist of steep, terraced vineyards, small plots and areas that are difficult to access. Since August 2020 the city’s wine estate has been cultivated in accordance with the directives of the Bioland Association. The first Bioland wine is scheduled to come on the market in 2023. As from December 2020, Stuttgart’s municipal wines can be sampled and also purchased at the city of Stuttgart’s new Vinothek in the centre of town.

The younger wine growers from the Stuttgart Region – some of them in the second or third generation – have brought a breath of fresh air to the viniculture scene. Since 2018, for example, 17 up-and-coming young vintners have presented their wines on their own stand at the annual Stuttgart Wine Festival. And these young growers produce not only excellent wines, but also other kinds of alcoholic beverages: “GINSTR”, one of the world’s finest gins, was developed in cooperation with Markus Escher from the Weingut Escher.

Since October 2020 the state capital of Stuttgart has officially borne the title of “Weinsüden-Weinort” – South German wine-growing community. This accolade, awarded by the Tourismusmarketing GmbH Baden-Württemberg (TMWB), for the first time honours cities and communities that can look back on a long history of viniculture.

Enjoy an incomparable living experience in the SI-Centrum Stuttgart! Whether you are planning a city tour, a musical, trade fair or business visit in Stuttgart and are looking for a well-kept and affordable accommodation for an overnight, a few days or a longer stay?

Vollmoellerstrasse 5, 70563 Stuttgart-Vaihingen, Germany
The Pullman Stuttgart Fontana is located next to the beautiful city park in the Vaihingen district of Stuttgart, with all the stylish ambiance the exhibition/economic center has to offer. The hotel boasts 9 contemporary meeting rooms with natural light and parquet flooring and capacity for 400 people. The 12,916 sq. ft. (1200 sq. m) fit and spa Lounge is a true wellness oasis where you can use the spacious fitness area or simply relax in the pool or sauna, or on the pretty sunbathing terrace.

Charles-Lindbergh-Platz 1, 71034 Böblingen, Germany
Arrive and feel welcome in a unique atmosphere. In keeping with the motto, you’ll feel welcome in the four-star V8 HOTEL. It’s all about the automobile. Whether in the bar, lobby or in the restaurant – every guest will find their individual well-being area. The epochs of the automotive history and the versatile use of the vehicles over time are reflected in the furnishing of the hotel rooms in both houses.