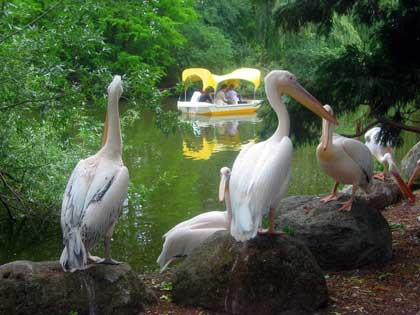 The Luisenpark extends over an area of 42 hectares – more than 100 acres – and is open daily all year round from 9 a.m. until dusk.

A short history of the Luisenpark
The Luisenpark Mannheim was first planned and laid out from 1892 – 1903. It is named after the Grand Duchess Luise von Baden, daughter of Kaiser Wilhelm I.

A new greenhouse – the Pflanzenschauhaus – was built in 1958 to replace the original Palmenhalle plant building which was destroyed during WWII.

1975 – Germany’s annual National Garden Show (Bundesgartenschau or BUGA in German) took place in the Luisenpark – the perfect opportunity for a complete renewal of the park. The new park was planned by the renowned landscape architect firm of Wagenfeld, Leipacher und Boyer.

1996 – The tropical Butterfly Paradise building – the first in southwestern Germany – was opened, the Pflanzenschauhaus building was extended in order to house a central American cactus collection and a second exhibition hall was added.

2001 – The Chinese garden with its Chinese Teahouse was opened.

2004 – An artificial rock wall was built in the foyer of the Pflanzenschauhaus, providing a natural background for the neighboring cayman and dwarf otter compounds.

From 2007 – 2009 the Pflanzenschauhaus was again extended: a new cold house for tree ferns was built next to the large tropical greenhouse. And a garden for medical plants was opened.

2008 – Building work began on a new main entrance with a souvenir shop.

Today, approximately 270 people work at the Luisenpark and its “little brother,” the Herzogenriedpark in Mannheim-Neckarstadt.

Among the many animals in the park are more than 100 storks, flamingos, Humboldt penguins, zebra mongooses and cotton top tamarins.

Visitors can watch the penguins being fed every day at 1 p.m. except Wednesdays when feeding is at 2 p.m.

New Animals born on the Luisenpark Farm in spring 2011 include twin Coburg Fox Sheep (the name comes from the unusal red color of the wool); twin Thuringian Goats; and 21 baby Swabian-Hall Swine. 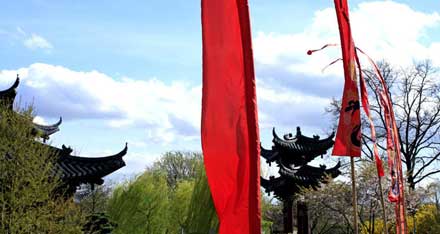 The Chinese garden is laid out according to traditional Chinese Feng Shui methods, paying particular attention to the harmony of the seven major things: earth, heaven, stones, water, buildings, paths and plants should all interact harmoniously and naturally. The paeonies which bloom in the Chinese garden in May, a traditional Chinese plant, cultivated in China for over 2,000 years, should not be missed.

Drink tea and forget the noise of the madding crowd – The traditional tea ceremony, which takes about an hour, is performed by Mrs Shuli Meng and costs €12 per person – booking required, telephone 0621 – 4107235. 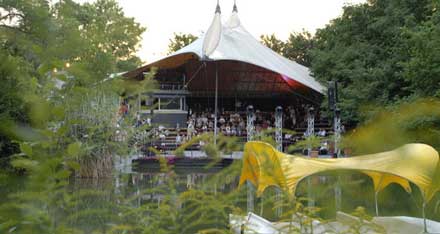 The Seebuhne is a stage that floats above the water with space for 1,000 guests.

Anton the stork is the park mascot. He can be bought at the souvenir shop.

Set of 10 entry tickets that can be used by different people throughout the year
Adults: €54,00
Concessionary tickets: €36,00