Heidelberg is a city of contrasts. Charming and romantic, with its old town nestling in a narrow, natural bowl formed by the hills of the Odenwald along the bank of the Neckar river under the ruins of its famous castle.

If there’s one view that sums up all the charm and interest of Germany in one go, it’s probably the one from the so-called Philosopher’s Walk taking in Heidelberg’s stunning Castle romantically brooding above the Old City on the River Neckar with its lovely Old Bridge. The home of Germany’s oldest university, the city claims to have Germany’s longest pedestrian zone, and its downtown section consists almost exclusively of Baroque houses and mansions built after a terrible destruction in 1693.

Highlights of a city tour include the Gothic Church of the Holy Spirit, the magnificent façade of the 16th-century Knight’s House and the Student Prison, where the inside is covered by curious graffiti recording the heroic deeds and injustices suffered by its former inmates.

A short but brisk climb (or a trip in the funicular) takes one up to Germany’s largest castle ruin, whose impressive dimensions are best explored when walking through the castle gardens. These provide a classic view over the city of which Mark Twain once reflected “I have never enjoyed a view which had such a serene and satisfying charm about it.”

Heidelberg’s castle ruins have been famous for centuries as romantic ruins, so they’ve not been fully restored. Yet this is one of the most evocative castles you might visit in Europe. Inside is a wonderful Pharmacy museum, as well as the world’s largest wine barrel (a vat having a capacity of 195,000 liters or approx. 51,514 gallons.) There is a wine bar inside the palace, and a small cafe outside where you can get a drink or eat a light meal.

The castle courtyard is dominated by two magnificent façades with impressive sculpture, but the main magnet here is the wine cellar containing the Great Tun. Billed as the world’s biggest wine barrel, it impressed Herman Melville so deeply that he named a chapter of Moby Dick after it. A tour of the castle interior embraces a good selection of period decoration and furniture, while the view from the terrace behind the Friedrich Building is especially memorable.

Heidelberg university is Germany’s oldest, founded in 1386. Famous scholars who worked at the university include the father of sociology Max Weber, the philosophers Georg Wilhelm Friedrich Hegel and more recently Karl Jaspers, and the chemist Robert Bunsen, who invented the Bunsen burner.

But Heidelberg is also very modern, a center of top-quality science, home of several Nobel prizewinners, of the German Cancer Research Center (DKFZ) and of the European Molecular Biology Laboratory (EMBL Heidelberg), of biotech start-ups, and of the multinational companies SAP, in nearby Walldorf, and the Heidelberg Print Machine Company, Heidelberger Druckmaschinen. The Druckmaschinen Print Media Academy opposite the main railway station is one of very few ultra-modern buildings in the center of Heidelberg and a very beautiful one at that, a glass tower which also houses a post-modern cocktail bar and a Michelin-starred restaurant, Schwarz, probably one of the best staff canteens in the world.

Mark Twain enjoyed a visit in 1878 when he apparently came on May 6 for the day and loved it so much that he stayed three months. There were already quite a few Americans and British people living in Heidelberg by 1878 so he had plenty of people to talk to in his native language.

The city, being fairly small (population around 135,000, 28,000 of which are students at the university) is rather quiet but it hosts world-class annual jazz (www.enjoyjazz.de) and film (www.iffmh.de) festivals, both in conjunction with its neighboring city of Mannheim.

The city’s Kurpfalzmuseum (Kurpfälzisches Museum der Stadt Heidelberg) on the Hauptstrasse, the main artery in the old town, houses the jaw of Homo heidelbergensis, a prehistoric man who lived in the area about 600,000 years ago.

The Karlstorbahnhof cultural center (www.karlstorbahnhof.de), located in the old railway station at the northern end of the Hauptstrasse, offers a lively and full program of modern music and cinema with over 1,000 events every year. Cave 54 is Germany’s oldest student jazz club, founded as a jazz cellar in February 1954 by Heidelberg students who had formed an “Association for the Promotion and Maintenance of Student Sociability”. The German-American Institute/DAI Deutsch-Amerikanisches Institut (www.dai-heidelberg.de) adds to the culture of the city with concerts, guest speakers, readings and courses as well as the world poetry festival PoetZone.

Each summer, the “Schlossfestspiele Heidelberg” festival brings performances of theater, opera and dance to the castle ruins. One evergreen favorite is Sigmund Romberg’s operetta The Student Prince, which of course was made even more famous by Ernst Lubitsch’s silent film of the operetta titled The Student Prince in Old Heidelberg and which is performed every summer as part of the festival.

Popular restaurants liked by the critics apart fom Schwarz in the Print Academy are: Ritter, Simplicissimus, Weisser Bock and Romer, all in the old town. Hugo’s in Rohrbacher Strasse offers simple but quite good food and a selection of wines in a pleasant and cozy atmosphere. The Moghul Tandoori Indian restaurant at Brückenkopfstr. 1, the building at the northern bank of the Theodor-Heuss-Brücke, the bridge linking Bismarckplatz with Neuenheim, is rather good for a German Indian restaurant and has a pretty terrace with beautiful views over the Neckar river and up to the castle. Kulturbrauerei and Brauhaus Vetter offer a range of home-brewed specialty beers and the kind of rustic German food that goes well with beer. The Untere Strasse, parallel to the Haupstrasse and one street closer to the river, has many bars for those feeling inclined to go bar-hopping (or pub crawling if they are British).

There are many hotels in Heidelberg. Some recommended by the city of Heidelberg are: Europäischer Hof Hotel Europa (one of the “Leading Hotels of the World”), the ancient Zum Ritter St. Georg on Marktplatz, chain hotels such as Crowne Plaza, Marriott or NH. For the more hip traveller, there’s the Art Hotel (www.arthotel.de) with its modern glass architecture, or the Hip Hotel in the Hauptstrasse (www.hip-hotel.de). The Holländer Hof and Zur Alten Brücke near the famous Old Bridge both look pleasantly inviting and there is also the relatively new Villa Marstall.

The Heidelberg Convention and Visitors Bureau (www.heidelberg-marketing.de) helps tourists with planning a trip and hotel reservations. It can help with guided tours, such a panorama bus tour or a boat trip on the Neckar.

Heidelberg Castle Illumination and Fireworks: Several times every year, the Castle Ruin is bathed in red light in memory of the two fires of 1689 and 1693. The spectacle is combined with a spectacular firework display over the River Neckar. In 2023 the spectacles will take place on June 3, July 8 and September 2.

The ruins of Heidelberg Castle are among the most important Renaissance structures north of the Alps. The castle has been destroyed several times in its history, by bolts of lightning, for instance in 1537 when much of the upper part of the castle was destroyed, and again in 1764.The castle was also badly damaged in two major wars, the Thirty Years” War and the Palatinate War of Succession.

The city of Heidelberg was badly damaged during the Thirty Years” War (1618-1648), one of the most destructive conflicts in European history, when opposing armies fought in the hills above the town, and then again during the Palatinate War of Succession, also known as the War of the Grand Alliance (1689-1697). In 1693, the troops of the Sun King Louis XIV burnt down the castle, leaving behind the world-famous ruins.

To commemorate the destruction of the castle by the French, Heidelberg celebrates castle illuminations three times every summer. Picturesque Bengal fires flood the ruined walls in a dazzling red light. When the fire has died down, it is followed by a brilliant fireworks display over the Neckar. The Elector Friedrich V first had the fireworks staged in 1613, in order to provide a fitting welcome for his newly-betrothed wife Elizabeth Stuart. These fireworks laid the cornerstone for the later festivals of light held in the night sky over Heidelberg.

The fireworks are ignited from the Old Bridge, which is closed to pedestrians from 17:00. Those on foot or bicycle can cross the river via the weir beside Karlstor and both pedestrians and cars can use the Theodor-Heuss-Bridge connecting Bismarckplatz with Neuenheim. All traffic is diverted from the roads along both sides of the Neckar river routes from around 21:00 until after the crowds have dispersed around 23:00 hours.

Much of the information in this article is taken from Heidelberg Tourist Marketing, www.heidelberg-marketing.de 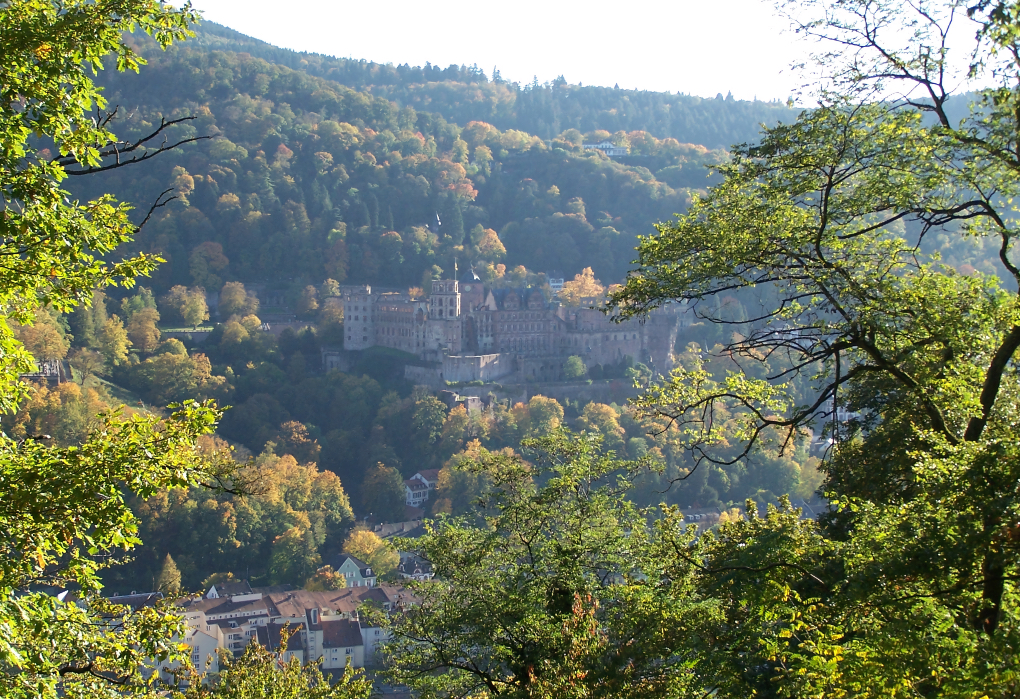