The biggest Wine & Sausage Festival in the world

It’s one of the largest, most traditional and entertaining public festivals in Germany. It is over 570 years old, and still as young as ever – the Bad Dürkheim festival of festivals – the main event of the year in the Pfalz.

The entertainment along with the wine is one of the distinctive features of the festival. You can enjoy over 150 different wines in over 50 different places – from the mellow Riesling to the finest ice-wine. Whether in the large wine halls or at the traditional “Schubkärchler” – small traditional wine stands with scrubbed wooden tables worn smooth over the years – the Dürkheim wine loses none of its flavour wherever you drink it. Or if you prefer to enjoy a fine wine in a more tranquil and intimate atmosphere, the Weindorf – the wine village – is the place for you.

Drinking without having to worry about alcohol limits – every driver’s dream! No problem at the Dürkheimer Wurstmarkt. The greatest wine festival in the world is in the heart of the Pfalz and is easy to get to by bus or rail from any direction – right around the clock!

Why not take time out between glasses to enjoy a short walk to the Michaelskapelle (St. Michael’s Chapel) which sits on the Michaelsberg above the market. Up until the 15 th century, pilgrims walked up the hill on St. Michael’s Day and this is the origin of the Wurstmarkt festival.

Tradition and wine – two things which best express the affection for the Pfalz felt by its natives.

As the local poet Karl Räder put it:

“The Wurstmarkt is the only festival where you meet old friends you’ve never seen before”.

Come and see us. Be our guest. Become one of our “old friends”. 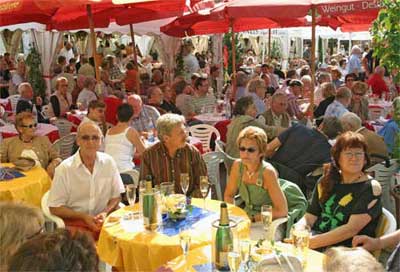 The Sausage Fair in the 20th century

Only in the last century, in 1910, the Sausage Fair was for the first time held on the second and third weekends of September. This date became “official” only in 1913, when the Royal Bavarian State Government gave its approval for the change of date. At the same time, the Pre- and Post-Fair were extended by Saturdays so that the Sausage Fair now lasted for 6 days. In 1926, the Sausage Fair was added another day, a seventh day in 1951 and another day in 1965. Only since 1985, Bad Dürkheim celebrates the party to end all parties with its guests from countries all over the world for nine days (pre-fair Friday is another festival day).

After World War II, during which there was no Sausage Fair, an Autumn Fair was held instead of the Sausage Fair. In 1948, because of the lack of meat, the Sausage Fair was replaced with a Fish Fair where only fish sandwiches and “fish sausage” were sold. On top of that, each visitor was only granted one bottle of wine. Special tickets made sure that these restrictions were properly kept. In that year, 46,650 bottles of wine were sold for 5 Reichsmarks a bottle.

In 1949, the first “regular” postwar Sausage Fair was held. The following time of economic prosperity also had a thriving effect on the Sausage Fair. Between 1949 and 1958 the amount of wine drunk at the Fair almost doubled to 158,673 liters. 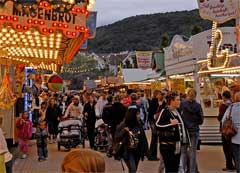 From the 1950s on, a large number of attractions was introduced at the Sausage Fair. The “Rotor”, “Menschen kleben an der Wand” (1955), “Jet Spiral”, Bobsleigh run, 3-storey car race, and “Taifun” (1957), “Sputnik” with several space capsules, a new Super-Ferris Wheel and a 6-column-dodgem area (1959) are just some of the various former attractions, which, from the 1960s on, became even bigger, higher and faster.

In 1966, the consummated wine for the first time exceeds the 200,000 liters mark. Now, the Sausage Fair posters officially show it: The Sausage Fair is the largest wine fair of the world.

The market becomes a festival

The Sausage Fair – The Origins

While traders such as potters, coopers, crockery traders and small traders were becoming less important, the demand for entertainment was steadily growing.

In 1830, there was a circus, fire-eaters, puppet shows, a riding school, other fairground entertainers, and numerous musicians.

The first official mention of the name “Wurstmarkt” (Sausage Fair) dates back to 1832. The name derives from the enormous amount of sausage which was consummated during the fair.

The so-called “Post-Fair” was for the first time held in 1882; it was at first restricted to Sunday.

In 1888 there was a variety theater, photographers, carousels, ball and shooting galleries as well as drinking halls and cookshops. At this time, the circus was the main attraction of the Sausage Fair.