The golden spires of Speyer

Crossing the Rhine, the vast Cathedral with its four towers is imposingly massive even today. So what sort of impression must it have made when first consecrated in 1061? It was certainly designed to impress, because its founder, the newly elected German Emperor, Conrad II, wanted to create a fittingly grandiose burial church for himself and his heirs of the Salian dynasty.

He was clearly not a man of half-measures, because the edifice begun in 1024 was the biggest building in Christendom. However, neither he nor his son, Henry III, lived to see the scheme completed in 1061. And how shocked they would have been to know that their successor, Henry IV, was far from satisfied by their efforts. Building fashions were changing, and the new emperor clearly disapproved of such dated features as the small windows and flat wooden ceiling.

To see why, start your visit to the cathedral by walking to the park at its east end. The tiny windows and roughcast stonework on the two towers (note their pointed “Rhenish helms”) give some idea of how Conrad’s original building must have looked. In contrast, Henry IV wanted larger windows like those you see on the semi-circular apse plus more elegant (and expensive) stonework cut in regular blocks (so-called ‘ashlar’).

When we get inside, we’ll see that he also added an extraordinary stone vaulted ceiling that was a wonder of its time and gave an even greater impression of height.

As we walk around to the south side, it’s perhaps hard to believe that Henry was to die excommunicate in 1106, meaning that he couldn’t be buried in his own magnificent structure. He was the emperor who had the famous run-in with Pope Gregory VII that culminated, in 1076, in him having to kneel for three days in the snow outside the papal residence in Canossa before being admitted and restored into the church. But Henry relapsed again in 1102, and it was only a hair-splitting theological stratagem that allowed him to be entombed in the new Afra Chapel on the north side, because it had not yet been consecrated.

Going along the south side, we can see evidence of a fateful event in the cathedral’s history. Just under the eaves of the roof, there’s a lovely frieze of leaf-like palmettes that was created by imported Italian craftsmen. But look closely and you’ll see that the carving suddenly becomes more regular (and less interesting), continuing this way until, further to the east, it regains its vivacity. What happened? Unfortunately, in 1689, Louis XIV’s army decided to raze the city  of Speyer to the ground, the fire got out of control, and the whole roof of the cathedral burnt out, so that a section of the main nave simply collapsed. A century was to pass before the main body of the church was restored to something approaching its original state.

However, the west façade remained a ruin right into the 19th century, when the architect, Heinrich Hübsch, was commissioned to rebuild it. As we reach this end, prepare  for a shock. Here, instead of the impressive simplicity of German Romanesque, we’re suddenly in the fanciful world of recreated Italian splendor. It may have a certain grandeur, but it could hardly be more out of place. Apparently, Hübsch refused to accept any salary for his work on this project, and it could be argued that he was not underpaid.

Before we go inside, though, take a look at the ancient enormous bowl, the Domnapf, that marks the boundary between the city of Speyer and the bishop’s domain. Supposedly, when a new bishop was consecrated, the bowl was filled with wine to soften the burghers’ mood before he entered the city via the gateway one can see at the other end of the High Street.

But let’s turn round now, pass through the eastern porch and savor one of the great early medieval interiors of Europe. The sheer size of it is humbling, the lack of ornament gives it a tremendous austerity that is only slightly mildened by the alternating pink and white stonework. Certainly, you can appreciate why Henry insisted on a vaulted stone ceiling, although it required those half-columns on the main piers to help shoulder the extra weight.

If you have the feeling that those paintings between the piers are nothing to write home about, you’re not alone. But imagine that, in the 19th century, the whole church was covered with similar works. Mercifully, restoration begun in the 1950s got rid of most of these. Having absorbed the stark magnificence of the nave, it is a little surprising to know that the best is yet to come.

Let’s go along the south aisle (with its groined vaulted ceiling, this gives a good idea of how Conrad II’s original cathedral must have looked) before descending the steps into the crypt. Low, dark and intimate, this is Romanesque architecture at its magical best.

The simple but attractive vaulting, the cushion capitals, the rough whitewashed masonry: it all seems touchingly human in scale after the celestial vastness of upstairs. Alas, the tombs of the builders’ dynasty were ransacked at the time of the fire of 1689, but the modern tombs still have a certain dignity, although nowhere near as fine as that of Rudolph of Hapsburg (d. 1291), the founder of what was to be Europe’s greatest ruling dynasty.

The locals say that Speyer is where the Pfalz begins to turn into Italy the context is supposed to be culinary, but in fact the buildings in the beautiful square opposite the cathedral really do look more Italian than typically German. The many outdoor cafés and Biergärten though are fairly typically German and all the better for it. 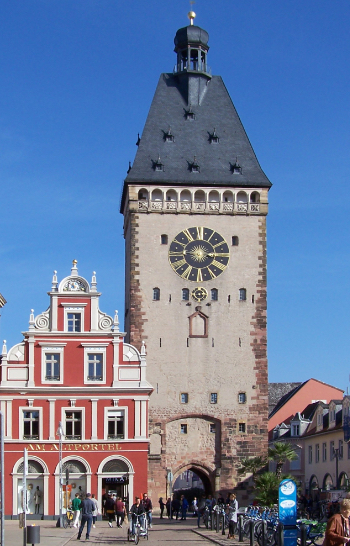 The old city gate was Speyer’s western city gate and part of the Middle Ages fortification that consisted of 68 wall and gate towers.

Construction started in 1230. Three hundred years later, the topmost floor of the tower with its late Gothic tracery balustrade and arcade arch of the gallery were added. The steep roof with the lantern has its origin in 1708. At 188 feet, it is one of the highest and most significant city gates in Germany. It shows its richly articulated side to the city; the embrasures on the west side allude to the defensive function of the tower.

On the northern side of passage through the old city gate, an iron bracket has been installed. It represented Speyer’s measure of length. Speyer’s normal foot, as it was called, was, at 28 centimetres, the measure of length for all things offered by every tradesperson in Speyer. Thanks to some fortunate circumstances, the tower survived the destruction of the city in 1689 and remained as it was then to become one of the few remnants of the city’s fortifications during the Middle Ages.

On each of the east and west sides of the old city gate, two clock dials have been applied. The pointers on the large dials point to the hour and the pointers on the small dials show the quarter hours. In earlier times, the hour was the most important indication of time. That is why the clock dials that give the full hours are significantly bigger than the dials that “only” give the quarter hours. Moreover, the hour dial is bigger on its outside so that travellers could already recognise what time it was while still some distance away from the city.

Things to see in Speyer