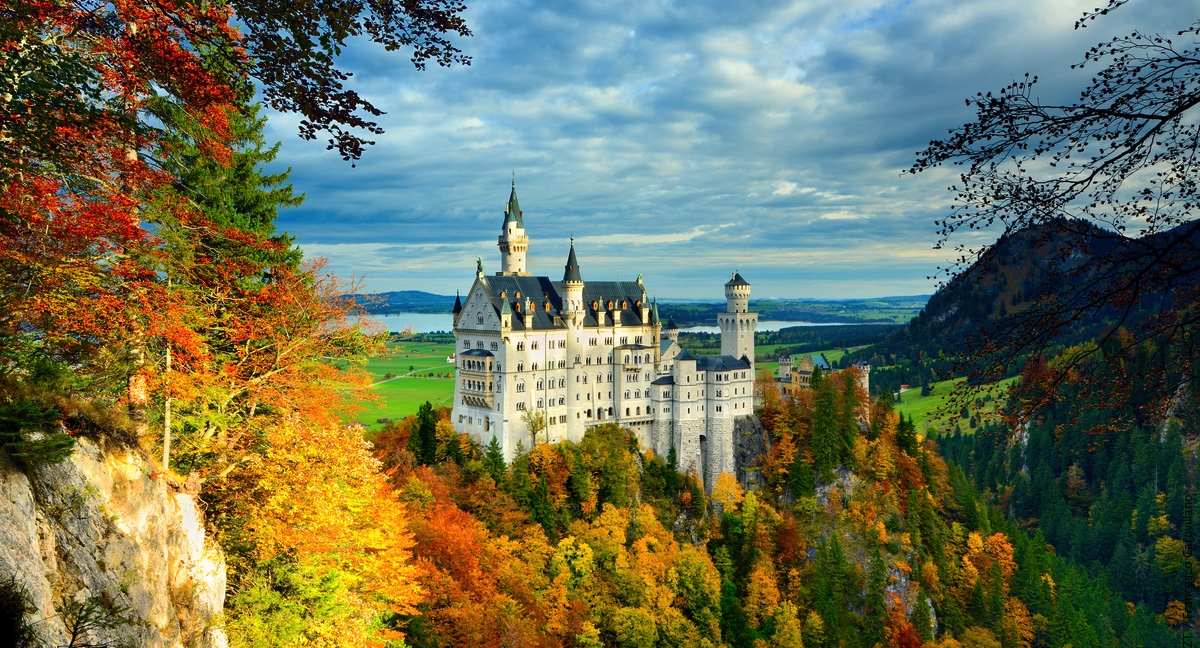 On the trail of “Mad King Ludwig” the Fairy Tale Prince

Storybook castles and an eccentric King Ludwig, picturesque landscapes and Germany’s highest mountain create an itinerary not to be missed during your European tour.

With its satisfying combination of snow-tipped mountains, forests, valleys and lakes, Upper Bavaria boasts some of the loveliest landscapes to be found anywhere in Europe. Yet it required the weird and wonderful personality of Ludwig II of Bavaria to provide the last touches that transformed it into an enchanted land, the authentic Disneyland that attracts millions of tourists each year.

After assuming the Bavarian throne in 1864, the Fairy Tale king’s eccentric character was to find lasting expression in a building spree that produced some of the most magical, mysterious and downright bizarre constructions one could ever hope to see. Add the romance of his image as a misunderstood artist plus the enigma of an untimely death under suspicious circumstances, and you have the recipe for a thousand and one fascinating yarns and theories. All of which is enough to make a trip in the footsteps of this delightful eccentric an absolute must during any tour in Europe.

Once upon a time in the Nymphenburg Castle…

The trail of Ludwig II begins in Nymphenburg Castle on the outskirts of Munich, where he was born on Aug. 25, 1845. Set in a delightful park with fountains, pools and lakes, this harmonious jewel of Baroque and Rococo architecture may well have molded Ludwig’s insatiable love of sumptuous and capricious ornament. The massive frescoes of the great hall, the lavish hall of mirrors in the nearby Amalienburg, and the wonderful porcelain collections are the elements that would later be absorbed into and transformed by Ludwig’s own idiosyncratic concepts of interior decoration. After the bustle of daytime Munich, an evening stroll through the spacious park amid bird-song and the scent of flowering shrubs may also help to explain why Ludwig soon tired of city life and sought the solitude and peace of the foothills of the Alps.

In Nymphenburg Castle, the only actual manifestation of Ludwig’s later oddity is the astonishing collection of sleighs and carriages in the Castle Museum in the Royal Stables (Marstall). Ornate to the point of absurdity, it’s hard to believe that some of these were used by Ludwig for bracing all-night expeditions through the snow-covered Bavarian countryside. His Wedding Carriage, the most splendid piece on show, never did get put to use as Ludwig got cold feet after a year-long engagement to his cousin, Sophie. Thereafter, he eschewed romance in favor of Romanticism.

Before we also follow the call of the mountains, though, it is a good idea to pop into Munich to visit the Church of St. Michael, the final resting place of the troubled monarch. It’s a lovely Renaissance building in the pedestrian precinct near the more famous Church of Our Lady, and its fancy stuccowork and massive vault are suitably splendid. In contrast, the crypt is somewhat bleak and bare, while Ludwig’s tomb has a sobriety that we will rarely encounter again on this tour.

Leaving Munich toward Garmisch-Partenkirchen, the landscape rapidly becomes more impressive as the distant prospects of the Alps loom closer. Leaving the highway by Starnberg, it’s a pleasantly undulating drive across country until you join the German Alpine Road at Steingaden. Here the rolling farmlands increasingly give way to lush forests pierced by granite cliffs, an impressive foretaste of the landscape surrounding Hohenschwangau Castle, where Ludwig spent most of his formative years.

The exterior of this charming neo-Gothic castle built by his father, Maximilian II of Bavaria, is characterized by a restraint that Ludwig would throw overboard once he had a free hand to give expression to his architectural fancy. The 14 rooms that are open to the public combine the splendor and quirkiness that Ludwig would make the cornerstones of his own creations.

The most striking feature is the cycle of vast murals celebrating the heroes and legends of Germany, which provide a clue to why Ludwig’s first encounter with the music of Richard Wagner was to be a decisive moment in the lives of both. Their remarkable relationship finds touching expression in Hohenschwangau’s music room, where the various memorabilia include almost groveling letters by the composer and the piano on which he and his patron played. Ludwig was later to spend so much money on Wagner’s new opera house in Bayreuth that contemporaries nicknamed the composer “Lolus,” the male version of Lola Montez, the expensive mistress of Ludwig’s father.

Ludwig’s taste for the exotic must also have been shaped by the bizarre Queen’s Bedroom, a pseudo-Moorish fantasy furnished by sofas given by Sultan Muhammed II. Particularly illuminating in a literal sense is Ludwig’s bed chamber, the ceiling of which is painted with stars that actually light up – an early sign of his preference for illusion over reality. From the window of this room, he would watch the construction work of his unfinished masterpiece, Neuschwanstein Castle.

Those getting into the romantic spirit of things will opt to make the severe ascent to this castle in the (not inexpensive) horse-drawn carriages, but the winding climb on foot allows one to savor a magnificent view back over Hohenschwangau Castle amid lakes and forests. Before going into Neuschwanstein, take a walk around behind it to the Pöllat Gorge, the bridge of which affords a great view of its bristling assembly of towers and turrets against a pleasing backdrop of distant hills.

Unlike Hohenschwangau, which basically involved the aping of old models, Neuschwanstein reveals Ludwig’s remarkable ability to transform old styles into something uniquely personal and distinctive.

While the exterior of Neuschwanstein and the wonderful view cannot fail to charm, the interior provides a clue to why Ludwig only spent a total of about four months actually living here.

Amid the lavish gilding, marble and tapestries, pomp and eccentricity wrestle to gain the upper hand, the former winning out in the Audience Room with its ludicrous swirling canopy, while the latter dominates in the artificial stalactite grotto and winter garden. This bizarre concoction was inspired by Tannhäuser, and indeed, Wagner hangs in the air like a guiding spirit, with even the royal bath-tap having the form of Lohengrin’s swan, while a figure of Siegfried dominates the dining table.

To reach our next port of call, Linderhof Palace, it’s not a bad idea to skirt the Ammer Mountains to take in the Wieskirche (perhaps Germany’s finest Rococo church), Oberammergau with its curious frescoed houses and the vast Abbey at Ettal tucked away in splendid isolation in a lovely valley offering glimpses of Germany’s highest mountain, the Zugspitz.

Linderhof itself is modest in size, the main attraction being the lovely formal terraced garden with its fountains and pools set in woodlands. Of particular interest are such endearingly capricious insertions as the round Temple of Venus, a Moorish Pavilion (Ludwig liked his court to parade around in oriental outfits) and the delightfully illuminated Venus Grotto. This last is another reference to Wagner’s Tannhäuser, as is the peculiar conch-shaped boat plunked in the middle of the lake.

The interior again has a surfeit of ornament that may appal or delight, but its most memorable feature is a dining table that could rise through the floor laden with offerings from the kitchen below. Bearing in mind that after the Unification of Germany in 1871 Ludwig was king in name only, the imposing study with its desk surmounted by a dazzling canopy seems an almost desperate denial of his political eclipse and puppet status.

Although remembered for his castles, Ludwig much preferred to spend his time in seclusion in the simpler setting of a hunting lodge. The one at Schachen located high up in the Alps near Garmisch-Partenkirchen was his favorite and most curious haunt.

The stunning mountain views alone would make it worth a visit, but the interior is also delightful. Whereas the ground floor has relatively simple, even cozy living quarters, the upper story is a remarkable Moorish fantasy. Amid eccentric oriental-style carvings, reliefs and paintings (including those of his castles), Ludwig could play out his fantasies of being an Ottoman potentate in a ravishingly incongruous Alpine setting.

Leaving Ludwig’s most modest creation, it’s a good idea to pick up the German Alpine Road by Garmisch for the long drive to his tour de force, the monumental Palace of Herrenchiemsee with its superb island site.

The drive takes one through wonderful landscapes, where the rearing hills and plunging valleys are charmingly dotted with onion towers and wayside crosses and chapels. However, the grandiose prospects that open up on the Chiemsee demonstrate that Ludwig had an unerring sense for choosing the absolutely ideal sites for his palaces.

The short boat trip from Prien followed, if one wishes, by another ride in a horse-drawn carriage brings us to Ludwig’s very personal version of Versailles. Tours begin, significantly, at a monument crowned by a peacock and lead into rooms of such daunting size and brilliant splendor that they surely defy human habitation. The visitor feels literally dwarfed by the monumental staircase leading to the opulent Room of State and the extraordinary Royal State Bedroom complete with adjoining circular bathroom. As the architectural culmination, the sparkling vistas of the monumental Hall of Mirrors emphasize that the palace is a gorgeous “folly” never intended for use. Indeed, Ludwig only actually spent one week in the Palace just before his death.

Which brings us to those mysterious happenings on Lake Starnberg soon after the Fairy Tale King’s enforced abdication on June 9, 1886. Stripped of his freedom and regarded as a dangerous lunatic, he was taken to Schloss Berg (not open to the public) under the care of Dr. Gudden. Five days later the pair were found drowned in the lake. A simple cross and a small votive chapel commemorate Ludwig’s death, the circumstances of which have never been satisfactorily explained. Perhaps there could have been no more fitting end to a man who declared, “I wish to remain an eternal enigma to myself and others.” In this, at the very least, he succeeded magnificently.